Broadchurch has been a television programme of quite exceptional brilliance and importance. Any proper analysis would need at least one repeated viewing and so will have to wait for the box set. However a few of the more obvious features can be noted at this point.

In the first place the programme has given the lie to the post-modernist twaddle that ‘event television’ is dead (‘event television’ meaning a programme which brings millions of people together and binds them to their sofas at a particular time). I have always been dubious about this theory given the prominence of programmes like Britain’s Got Talent but Broadchurch has reminded us that if a drama is good enough it too can be ‘event television’; people will be watching this as it is broadcast at 9.00 tonight (22nd April 2013) not on time-shift, record, I-player or equivalent or even ITV+1. It would take a personal catastrophe to get me away from the television tonight. If you can create a strong enough story-line then you can create a drama which will hold a significant part of the nation’s attention. 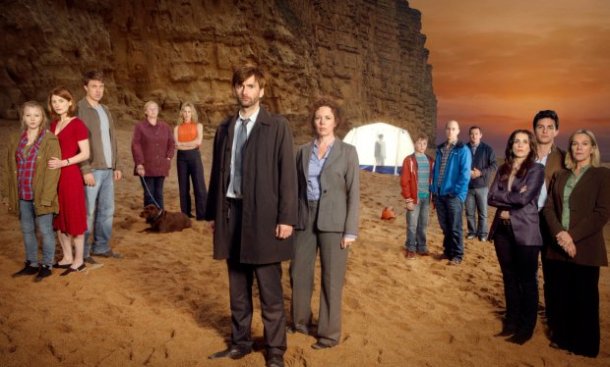 Now I would be the first to admit this is a very big if. Broadchurch has been such a success because of the coming together of a brilliant script, terrific cast and first-rate direction. It has managed to create a number of fascinating storylines and characters within the parameters of the overall storyline. And it has done this, breaking the mould, over 8 weeks. People have said that it was heavily influenced by The Killing (the Danish original) – I cannot speak to this as I have made two attempts to watch the latter and failed to engage with it. In fact I am dubious about these claims because of the critical importance of landscape (and seascape) in Broadchurch. The writer has drawn attention to the fact that he was heavily influenced by Thomas Hardy, and the programme acknowledges this influence. This is also a characteristic of British television. In fact the international predecessor of which I have occasionally been reminded, somewhat strangely, is Twin Peaks. There is a certain quirkiness about aspects of Broadchurch which fit more easily in that tradition than Scandinavian noir in my view.

My final note is much more personal. I am unable to remember a time when I was not utterly convinced of the superiority of the written over the televisual mystery. This is not to say that there have not been television mysteries which I have held in the highest regard (classic era Taggart springs immediately to mind) but even so the best TV mysteries have tended to be adaptations (Christie canon, Midsomer etc.) or have their base in adaptations  Ultimately Reginald Hill was always around to convince me of the superiority of the written word too. But I have not read a mystery by a living author that could hold a handle to Broadchurch in terms of both contemporary relevance and excellence of plotting for a long time. Yes, there are still writers from whom I derive great pleasure, but managing to bestride the stage as definitively as Broadchurch? No. There is too much that is formulaic, too much that turns its back on good plotting, too much that abandons the sociological for the so-called ‘psychological’ (though its relation to psychology is at best tenuous). Broadchurch throws down a televisual gauntlet to mystery writers.

One thought on “Broadchurch’s Gauntlet”