Three fairly quick movie reports as I don’t have much time these days. Easily the best both in terms of quality and enjoyment was Godard’s Une Femme est Une Femme (1961) ; well that almost goes without saying. Godard’s third film and his first in colour it is, by his standards, a lighthearted, even frothy affair and in sharp contrast to the preceding Un Petit Soldat. Whether he was determined that this at least should not be banned I am unclear. The story, such as it is, is a slight one – Angela wants a child but her lover Emile is not keen; Angela sleeps with Emile’s best friend Alfred (who protests that he is love with her) but then realises this is a step too far. The film is visually and technically brilliant. Godard uses a vivid palette – a child with a paintbox rather than a child in a sweetshop – and throws in all kinds of visual and literary references ; the movie is homage to and commentary on the American musical comedy tradition. It is charming, lively and introduces us to the mesmerising Anna Karina, Godard’s muse, as Angela. 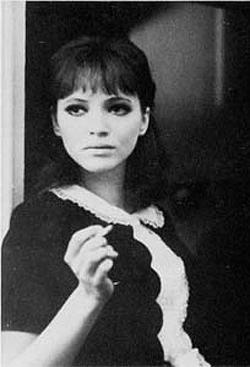 But of course I am only skimming the surface – and it is with the nature of surfaces and their relationship to ‘truth’ – or rather the fact that the two cannot be divorced that Godard is more seriously concerned. There is a brilliant essay examining this and analysing the film at http://www.nyu.edu/cas/ewp/lackergodard05.pdf.  Above all Une Femme Est Une Femme proves Godard’s ability to work in a completely different genre, make a very different kind of film and yet still be utterly original, compelling and visually fascinating.

About Hidden (Cache) directed by Michael Haneke (2005) I am a little undecided. In itself this is a decent little psycho-thriller making some interesting use of video tapes and cinematically shot with a great purity. It takes itself a little too seriously for what is basically a pretty slender tale and its attempt to epater le bourgeois is not wholly successful; however this was a conclusion I came to after watching an interview with the director rather than my initial reaction to the film which was generally pretty positive. The real reason for my indecision however is that this film was voted by UK Times critics as the best of the noughties (the years 2000-10). Now even given that I am very out of touch with recent cinema I have seen two better French language films in the past year (I’ve Loved You So Long and The Class) so I have every reason to doubt this assessment. But it places a weight of expectation upon the film which perhaps almost inevitably it utterly failed to live up to. If it really were the case that this was the best film of the noughties then one would have to say that cinema has undergone a catastrophic decline as there is infinitely more cinematic flair and ability in even a few scenes of one of Godard’s lesser efforts (as I think Une Femme Est Une Femme might be described) than in the whole of Hidden. All this shows the great danger of listening to and being influenced by critical opinion rather than relying on one’s own judgement; in itself as I say Hidden is a pleasing enough little psycho-thriller which if it did not bear this weight would have been much more pleasurable to watch.

Easy Virtue directed by Stephen Elliott (2008) is based on a Noel Coward play though how much of the original survives I have no idea (not much according to the makers in the accompanying material). It tells the story of a young American woman who makes a disastrous marriage into a declining aristocratic family. The family, under the direction of poisonous matriarch Mrs Whittaker, brilliantly played by Kristin Scott Thomas, eventually succeed in driving her away. Easy Virtue is thoroughly enjoyable, particularly when taken as a kind of madcap parody of Brideshead Revisited (where Mrs Whittaker is equivalent to Lady Flyte). There is nothing of any great depth here either cinematically or thematically but it is an undeniably enjoyable film.

One thought on “Three February Movies”