A scanty month dominated by another bout of Depression. In fact a week of recovery at the beginning June has only punctuated an episode which began in May and from which I am far from recovered. The problem in writing about Depression is that it is miserably re-iterative, solipsistic and impossible to make interesting. Depression is a state of complete negativity – not feeling, not thinking, not doing and not being. It is absence and silence. So I will pass over it and note those few things of interest which have occurred this month.

To begin the musical highlight was another excellent CBSO concert; this one featured a programme of Mahler’s Symphonic Prelude, Britten’s Les Illuminations and Shostakovich’s 5th Symphony. The Britten is a vocal setting of some completely loopy poetry by Rimbaud ; it was brilliantly sung by a Canadian Barbara Hannigan. The music is extremely complex and feels at times a little too intricate, perhaps even too experimental if that is possible although it was still scintillating. The Shostakovitch was wholly terrific; consistently interesting, with a wonderfully moving slow third movement. It is the fourth movement which is controversial however, as there is debate about whether the composer was sincere in its overwhelming optimism, or whether he was merely ensuring his survival by composing something in accord with Stalinistdictates of good musical practice. The composer’s own explanations at the time and then at the end of his life are wholly contradictory on this point. Whatever the truth of this it is an electrifying piece of music.

In my short period of wellness we did manage to get back to Compton Verney to hear a talk by Karen O’Brien on the subject of Women and Enlightenment in 18th Century Britain which is also the title of her recently published book. The talk was in connection with an exhibition of Georgian Portraits and also obviously to promote the book – I am not being critical here – indeed we bought the book and I hope at some point to read and write about it! The following is one of my summaries to which all the usual disclaimers (not to be taken as wholly accurate etc.!) apply. Anyway O’Brien began by saying that her subject was an attempt to answer the question what Enlightenment did for women in 18thC Britain? Her very broad answer is that there were some gains, but within severe limits – and that these were followed by setbacks in the early to mid 19thC. However the evidence is contradictory. The exhibition demonstrates the relaxation of dress and style between the mid and late 18thC. There is a higher value of affection in marriage, and the start of a debate about marrying for money as against marrying for affection. O’Brien believes that the reforming Anglican and dissenting movements actually contributed to arguments for equality because of stress on equality of all before God (this is one of several lines of argument which I will be interested to read more about in her book). There definitely is a feeling that things changed for women between1750 and 1830 which O’Brien exemplified with a quote from Maria Edgeworth [1] ; however there was no legal or political progress, indeed there is in fact a suggestion that women’s settlements under wills get worse and worse – as illustrated by Sense and Sensibility. Although there were a few pamphlets earlier in the century it was really only in the 1790’s that women developed a voice and crucial in this were Catherine Macaulay and, of course, Mary Wollstonecraft.

In the 18thC the prestige of learned women rose – main factor rise of the blue-stockings – salon of Mary Montagu crucial – visible campaign that women could be learned and rational – Mary Astell was an important pre-Salon figure arguing that no-one can properly know God unless they read Bible and reflect – have learning and reason. Steady increase in women’s literacy and huge expansion in print – larger and larger number of women writers – poets but above all novelists. There is a massive involvement of women in 18thC writing but still ambivalence about their place. Opportunities for women to engage in social life expand considerably – exemplified by Vauxhall Gardens and Ranelagh – more confidence for women to get involved in public campaigns eg: anti slave-trade – idea of women as moral creatures. Big debate about the type of education and socialisation desirable for women – Rousseau did not believe in equality – it is Emile who receives the ideal upbringing while Sophie does not. However this was a big influence later in 18thC England and women asked if Emile why not Sophie? This was in Wollstonecraft’s mind when she came to write Vindication. O’Brien very interesting on Vindication noting its attacks on contemporary women, on the use of female sexuality -the book has a misogynistic/puritan side – attack on late 18thC novels where women have grand passion, are seduced and then have to die. As well as change for women there is general change – sense in novels of generation gap – also present in plays of Sheridan. 18thC great period of historical writing – Gibbon (very liberal on questions of women) – Scottish philosophers ask questions about how societies are organised economically and how that changes nature of society itself. Gothic revival included references to chivalry – fetishising of idea of the ‘lady’ – with moral restrictions of course! – some saw through all this eg: Wollstonecraft. Women in history – after Catherine Macaulay (who is a great heroine of O’Brien and I have omitted much she said) a lot of women start writing popular history – history of Queens -social history. Women themselves are historicised and placed in history. Bodies – Cartesian duality lasts well into 18thC – can be progressive because mind/body divide means mind is divorced from sex/gender and therefore equal [2]. By late 18thC however greater understanding of nervous systems and therefore brain/body connected – so then study of men’s/women’s nervous systems being different. Women blamed for population explosion – Hannah More – class-based attack on working-class women.

It will be seen that this was a rich and fruitful talk covering many areas which no doubt the book discusses in greater depth. Unfortunately the discussion/questions afterwards were generally unsatisfactory (apart from an interesting question about class which O’Brien said was central in everything) and did not really add anything. I look forward however to reading O’Brien’s book and following up many of the points she made in more detail.

The actual exhibition was a small one in which the outstanding picture (other than the Canalettos which I have talked about before – see April Days at https://movingtoyshop.wordpress.com/2009/04/28/april-days/ ) was Angelica Kaufmann’s Portrait of Laura Henrietta Pulteney (c 1770)…. 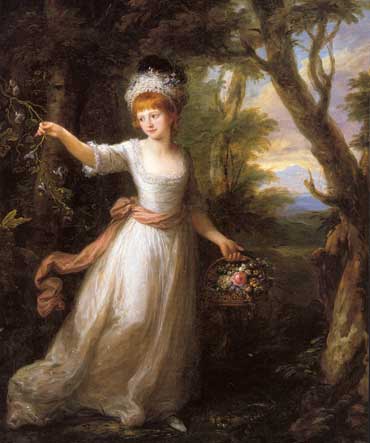 (in looking for this I came across an interesting YouTube video discussing this very picture at http://www.youtube.com/watch?v=CwsI9VZJS3Y . The short talk is centred on the way in which portraits of children changed in the 17th and 18th centuries and pays specific attention to the influence of Locke and Rousseau’s ideas on education; apparently Laura was raised in line with those ideas which are reflected in the picture – in a ‘natural’ landscape). I love the sinuosity of this picture and the way in which everything seems to curve and bend.

Only one film for this month – Pedro Almodovar’s Volver. I had not seen an Almodovar before and it may be that I came to it with too high expectations – or it may be that my slightly low mood dampened my reactions – but whatever the cause I was somewhat disappointed. This is not to say that it was ever boring or anything less than highly competent – but I found nothing exceptional about it. Another reason for this is that the film basically resolves itself into a sexual abuse murder mystery and I have just read too many of those. The strength of the film was that all this was seen from the women’s perspectives and crucially included that of the mother (of the abused daughter). It may be that I am being somewhat unfair; the film was always watchable. But I will not be rushing to view more Almodovar’s.

Finally moving to books I obviously haven’t been reading much this month. But I have collected another enormous (40!) pile of mysteries to review for Reviewing the Evidence and have already completed Laura Wilson’s follow-up to the brilliant Stratton’s War; entitled An Empty Death it matched all the heavy expectations which were laid on it (watch out for my review on rte – link on right). Outstanding from previous months are a couple of books which I am having trouble writing about but will mention here – Isaiah Berlin’s The Roots of Romanticism and Alexander Herzen’s My Past and Thoughts. The Berlin is, like all his works, utterly brilliant, but extremely hard to write about as I am finding. It was Berlin who led me to Herzen, yet another cause for gratitude, as My Past and Thoughts is a brilliant and wonderful book, which in turn will lead me to Russian 19thC literature about which I am deeply ignorant. I also read four of Caryl Churchill’s  plays (SoftCops, Top Girls, Fen and Serious Money) as a follow-up to our seeing Serious Money in May. These are difficult plays and I must admit to failing to grasp the meaning or intent of SoftCopsin particular; of course it is designed for performance and maybe needs to be viewed to make sense (or a clearer mind than I was able to bring at the time). Serious Money however is almost as much of a delight to read as to watch – indeed in some senses one is better able to appreciate the verse on the page; Top Girls is also a fascinating play. If I take anything out of my reading it is the fairly obvious point that in those two plays at least Churchill is very concerned with the meaning and development of feminism in 1980’s, and the intersection of class and gender politics. The confrontation of the sisters Marlene and Joyce in Act 3 of Top Girls is a striking example of this. If however we turn to Serious Money one striking thing is that at the end when the various characters present one-line summaries of their fates it is the women who, by and large, have triumphed in terms of material and worldly success – of the main characters Greville is in prison, Jake dead, Duckett broken-down, TK in jail etc. while Marylou, Scilla, Biddulph, Etherington, Jacinta are all doing fine. However as these summaries are followed by that appalling yet rousing final satiric chorus (‘five more glorious years’ celebrating Thatcher’s third election victory) it is very clear that we are not intended to see that success as in any sense meritorious or to be rejoiced at. Something has gone very, very wrong. This is not to suggest that Churchill does not know that she is dealing with a small percentage of women or that issues of class are not enormously important, but there is a sub-text of, if not despair, then deep concern that the the struggles of feminism seem to have culminated in some women behaving as viciously, heartlessly, ruthlessly, unpleasantly as men – indeed proving themselves to be rather better at it. I think however that I need to read these plays again and some more Churchill and some criticism – she is certainly a fascinating writer.